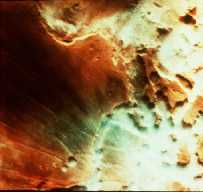 This is an image of fog in a Martian canyon.
Click on image for full size
Image from: NASA

This picture shows fog on Mars. More fog has been seen in images returned by Mars Global Surveyor of the south polar region of Mars.