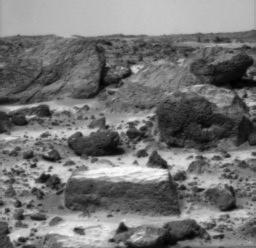 This is an image from Sojourner's front cameras on the morning of Sol 42 (August 19, 1997). Visible in the foreground is the rock nicknamed "Flat Top." Based on previous images from the Pathfinder lander camera, Flat Top appeared to have a layered texture (in the opinion of some scientists). These close-up images show that this is probably not the case. The texture visible on the side of the rock is made up of elongated pits, which may be either vesicles from volcanic outgassing or etches caused by weathering.