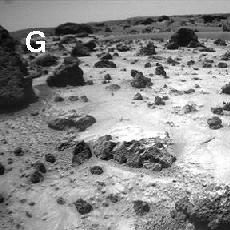 Unlike the rocks of Earth, where there are many things which cause erosion, the rocks of Mars erode because of only two things: wind and acid fog. Acid fog is very important, but because there is not a lot of water, the action of sand and wind is the most important thing to cause changes to the planet's surface.

Sand and dust from the surface is whipped up by the winds of Mars and distributed around the globe in global dust storms. The force of winds during these storms pounds sand into the rocks and breaks them down.

During the Mars Pathfinder mission, scientists found things which pointed to the importance of wind erosion:

A wind tail is shown behind the rock "Yogi" in the picture to the left.

This image shows pits and holes in a small rock found by the Mars Pathfinder Rover. The Souffle rock also reveals a very pitted surface. These pits and holes are the result of sand caught up in the winds...more