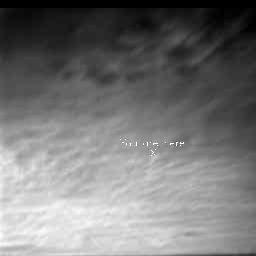 This is the first image showing clouds of Mars taken from the lander.
Click on image for full size
Image from: JPL/NASA

This is the first image showing clouds of Mars taken from the lander. Ground based viewing of Mars has shown that clouds seem to be plentiful only in the middle latitudes This may be because water of Mars may only be found at equatorial regions.

As early as 1796 scientists were reporting "yellow", and "white" or "bluish" clouds in the Martian atmosphere. With data from the Mariner 9 mission, scientists could finally prove that the clouds were made of water. It is known that there are weather patterns on Mars which resemble terrestrial storms. It is not known whether rain comes from these storms however!

Mars Pathfinder set out to record the same kind of temperature and pressure data which is used to diagnose the weather on Earth. Mars Pathfinder also recorded cloud patterns for study later. Some of these can be viewed in the Image Archive below.

Mars Pathfinder found the weather on Mars to be variable. There were light winds (16-35 km/hr - compare these speeds with those on the Earth), gusting both at night and during the day. Cold morning air was warmed by the surface and convected upward in small eddies. Afternoon temperatures were steady, with no evidence of eddy formation. The early afternoons were plagued by dust devils, which were repeatedly seen. Martian Global Dust Storms are considered to germinnate from dust devils such as these.