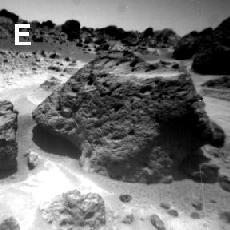 Dried debris left after a flood is "wind mobile" and can be lifted into the air by winds. The general process by which this occurs is called "

Features found in and near the rocks by the Mars Pathfinder lander provide evidence for both sandblasting and saltation on the Martian surface. The rock shown here, dubbed "Souffle", is surrounded by wind drifts as well as showing evidence of ventifact formation by sand erosion.

The efficacy of particles for abrasion depends upon the particles'

On Mars the winds accelerate to higher speeds than on Earth so that the sand grains are accelerated to higher speeds as well, and for a greater length of time. (This leads to a different angle of impact of sand grains on rocks and affects the gouging and chipping power of sandblasting winds). Because of Mars' lower gravity, the winds can more easily lift and carry sand particles. But the lower atmospheric pressure of Mars makes it harder for the winds to move sand particles. This makes the erosion of Martian rock a little different than on Earth.

Mars Global Surveyor carries an instrument which measures the altitudes of things. The instrument is called an altimeter, or "altitude-meter". The graph to the left shows the results returned from Mars...more