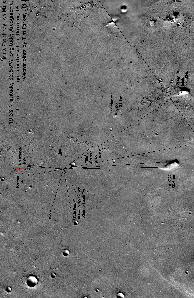 Mars Pathfinder landed in a valley of Mars called Ares Vallis, shown in this picture. Ares Vallis is near Xanthe Terra, which can be seen on the large map of Mars. The picture to the left is low-resolution and turned sideways. You have to click on the image to see everything.

Scientists expected to find many different sorts of rocks to experiment with. Rocks may have come from mountains around the landing site, some of which are 30 kilometers away, to the south, as viewed in the big image.

Following the Rover experiments however, the origin of the rocks of the plain became less clear. Reasons why the landing site may be different than expected include:

Scientists examined the rocks and soils around the Rover carefully to prove what the landing site was like.

Spinning the Rover's rear wheels was one way for scientists to test the soil of Mars. As the wheels dug into the surface, the Rover discovered that much of the ground is made of dust, possibly deposited...more

These are the findings of Mars Pathfinder. Rounded Pebbles were found - a result from analysis of the landing site, the rocks, and the soils. there were a variety of rocks deposited by a catastrophic flood...more