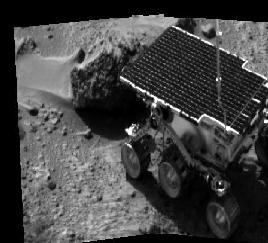 Barnacle Bill was the first rock to be explored by the Rover. It was found north by northwest of the Mars Pathfinder lander.

Barnacle Bill was a dark rock. Scientists think that may mean it is a basalt or a special kind of basalt called an andesite. It had many small holes over its surface (vesicles) but otherwise did not appear to be well eroded. These features help scientists figure out the possible origin of Barnacle Bill. Barnacle Bill may have been put in place by flowing water. Rocky outcroppings 30 km away also seem to be made of basalt or andesite. On the other hand, Barnacle Bill might be left over from the formation of the nearby crater called "Big Crater".

Basalt is an extrusive igneous rock that is very dark in color. It is the most common type of rock in the Earth's crust and it makes up most of the ocean floor. It is made of many dark colored minerals...more