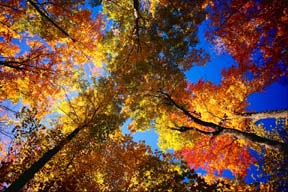 The Earth has seasons because it is tipped over to one side. It stays tipped in the same direction as it travels around the Sun. This means that sometimes the "top" of the Earth (which we call "north") is pointing towards the Sun, and sometimes it is pointing away.

Suppose the Earth were straight up and down. Then everybody would have the same season all year round. No more summer and winter!

The Moon is nearly straight up and down. So each spot on the Moon has the same "season" all year. Even if the Moon had seasons, they would differ from seasons on Earth. There is no air on the Moon, so there can never be April showers, or snow for snowmen, or even wind for flying kites. All of these things happen on Earth because it has an atmosphere.