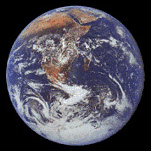 The Earth moves in at least two different ways. First, it travels around the Sun at 29.8 km/sec. This is called its "orbital velocity". At the same time, the Earth also spins on its axis at a rate of .47 km/sec (its "rotational velocity").

That means we're travelling through space at nearly 67,000 mph, while at the same time spinning around in circles at over 1000 mph! Whew! Almost makes you dizzy, doesn't it?