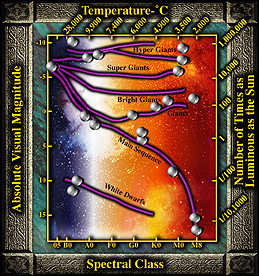 Wow, this is a popular question! Scientists have learned a lot about stars, especially the stages in their lives. Since a single star can live for billions of years, scientists study several stars at different stages of their lives.

Certain characteristics of stars are related to each other. The luminosity, temperature, magnitude, spectral class and mass are all related. For example, larger stars are cooler, red in color and are very luminous. All these characteristics are important in determining the age of a star, but scientists found that the composition of a star is the most important.

The Hertzsprung-Russell Diagram is a very famous diagram that shows how these characteristics of stars are related. Stars are divided into different categories depending on their temperature, size, etc. Most stars are either, main sequence, or giants. Scientists realized that the compositions of stars were related to the diagram. Stars spend most of their lives as a main sequence star. During this time they burn hydrogen in their core.

When a star burns hydrogen it creates helium. At some point the star uses up all the hydrogen, and starts to burn helium. The star expands and cools while burning the helium. During this stage a star is called a giant.

So why tell you all of this? Well, scientists discovered this is a very easy way to compare stars. It is also a great way to tell the age of a star. Scientists can look at the spectra of a star and tell its temperature, which is related to the size, etc. In turn, this information reveals how much hydrogen or helium is left inside the star. We know the rate at which stars burn the gases. Scientists can now tell how old the star is depending on its composition!

Most stars fall on a rather wide line (highlighted in red) that passes from the lower right to the upper left of the page. This line is called the main sequence. It tells us interesting things about how...more

Follow along the horizontal curves (highlighted in red). These are the locations of the giant stars. Giants don't behave like main sequence stars. The brightness is constant or even increasing as you...more