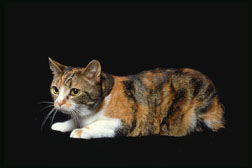 An idea called called "indeterminacy" says that an object can be two different ways at the same time. Schrodinger wanted to show that it was not true, so he came up with an illustration. This experiment is only immaginary, and can't really be done.

Schrodinger said that if you put a cat in a box, after a while the cat might be alive or it might be dead. We don't know, since we can't see in the box. Indeterminacy says that since we don't know, it must be both. Of course, we know that this isn't true, nothing can be alive and dead at the same time. This is just what Schrodinger wanted to show.