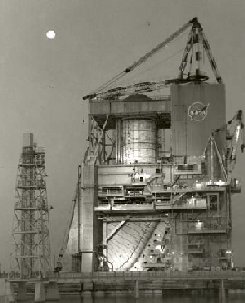 Well, unfortunately for your boyfriend, you're right -- the Moon is round! The planets and the Moon are round because they are big. You see, an object's gravity tries to pull all of its material as close to its center as it can. A sphere is the best shape for this because every point on a sphere's surface is as close to the center of the object as any other point on the sphere's surface. For smaller objects, like your car or an asteroid, the internal strength of the object is stronger than its own gravitational pull, so their irregular shape persists.

The structure of the Moon's interior is difficult to study. The Moon's crust, the top layer, is a rocky solid. Below the crust is the mantle which consists of a denser rock. Together, the crust and mantle form the Moon's lithosphere, which is very thick (perhaps 800 km) compared to the Earth's lithosphere. Beneath the lithosphere is a partially molten zone. Although it is not known for certain, many lunar geologists believe the Moon may have a small iron core, even though the Moon has no measurable magnetic field.

No one is buried on the Moon...well technically that is! One ounce of Gene Shoemaker's ashes were placed in a cylindrical container, wrapped with an inscription honoring Shoemaker's life and placed on the Lunar Prospector which impacted the Moon's surface on July 31, 1999. Shoemaker, who died on July 18, 1997, discovered (with the help of his wife Carolyn and colleague David Levy) the comet for which he is famous...Otherwise, all of the astronauts who have visited the Moon were accounted for upon their return to Earth! However, there was a tragedy associated with the Apollo program that you might be thinking of...on January 27, 1967, three astronauts were killed due to a fire in their module during a dress rehearsal for launch. They were practicing for Apollo 1, which would have led the way to the Moon.