What would life be like if humans lived on Mars? 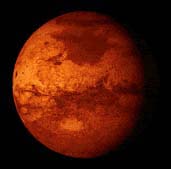 Many scientists believe that in the near future, humans may be able to leave Earth to live on Mars. If you decide that you might like to be among those to take part in this great adventure, there are a few things you might want to know . . .

1)On Mars, you'll get extra time in the day to do the things you want to do--like sleep in! Martian days are about half an hour longer than Earth days. But that's nothing compared to the extra time you'll get in a year--687 days versus only 365 days on Earth.

2)Before you leave Earth, be sure to pack a lot of soap and laundry detergent. The "Red Planet" gets its nickname for the fine, red dust that covers Mars' surface. It wouldn't be so bad if the dust just settled on the ground, then only your shoes would get ruined. The problem is that frequent and intense dust storms big enough to cover the entire planet can throw dust up to 25 miles into the air and last for months at a time--you're definitely going to get dirty!

3)Mars has some great scenery! While you're there, be sure to check out the volcano, Olympus Mons, the biggest mountain in the entire solar system. Its base is large enough to cover the entire state of Montana and Rhode Island could fit comfortably in its crater! It is thought that some of Mars' giant canyons and other surface features were formed from water flowing over the surface a long time ago when Mars was much warmer and may have supported life. Another bonus of Martian scenery: two moons in the nighttime sky--Phobos and Deimos.

4)Because Mars is located farther from the Sun than Earth, it will be a lot colder there. The average temperature on Mars is -63oF. That's about 120oF colder than on Earth! The extra distance will also make the Sun look much smaller in the sky than it does from Earth. But don't let the smaller-looking Sun and cold temperatures fool you! Mars lacks the protective ozone layer we have in Earth's atmosphere, so you're much more likely to be severely sunburned there. So take some serious sunscreen--like SPF 1000!!

Mars' cold temperatures might also cause you to think that the white flakes you see falling down around you and on the mountain tops are snowflakes, but they're actually crystals of frozen carbon dioxide (also known as "dry ice"). If fact, the Martian atmosphere is mostly carbon dioxide, so I guess you'll want to pack plenty of oxygen too!