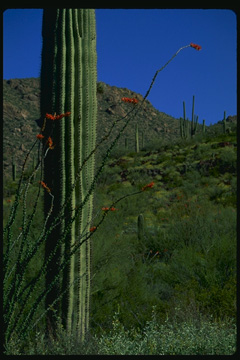 Deserts have very little rainfall in a year--usually less than 10 inches (25 cm). Because there is very little moisture in the air to hold onto the heat from the hot days, desert nights tend to be very cold. Taken together, the extreme temperature fluctuations and lack of water make the desert environment a very harsh one in which to live. The plants and animals you will find there have a wide variety of special features that allow them to cope with desert conditions.

Because food and water are hard to find, desert animals live in ways that require very little energy and waste little water. For example, snakes, scorpions, and lizards that must hunt other animals for food use poisonous venoms to kill their prey--this saves the hunter energy that would be needed to chase, catch, and fight its prey to the death.

To help save water during the hot days, many desert animals are "nocturnal", meaning they are active only at night. These animals sleep during the day in cool underground burrows or in caves and come out at night to find food. Many animals also have protective coverings to keep them from drying out, like the scaly skins of snakes and lizards, and the hard outer coverings of insects.

Plants also need to save valuable water. Plants known as "ephemerals" have very short lives. They can sprout from seed, grow, produce flowers, and make seeds for the next generation in only 2-4 weeks! Their rapid growth takes place during the desert's short rainy season which may last only a few days to a few weeks. Seeds from these plants have special waterproof coverings that keep them from drying out. The seeds will simply wait until the next year's rainy season to sprout and start the cycle over again.