This is a drawing of the evolution of the interior of an icy moon.
Click on image for full size
Image from: The New Solar System

How the Interior of Icy Moons Formed

The drawing shows a possible path in the evolution of the interior of icy moons. As the moons drew material from the nebula around them, bits of heavy, solid material accumulated inside the forming moon, as illustrated in figure A.

The ice on the outside of the core gradually changed from warm, slushy material, shown in purple in figure B, to frozen ices of various phases, as shown in figure C.

How a protomoon sweeps up nearby material

As shown in this picture, while they were forming in the solar nebula, the nucleii of the moons-to-be (called protomoon) drew material to themselves from the cloud of gas and dust around them. ...more 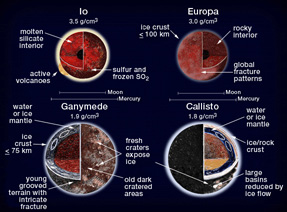 If the satellite has means of warming itself, then the interior may go through many startling changes as the moon evolves. The moon may change its size, and grow or shrink as the layers inside go through...more