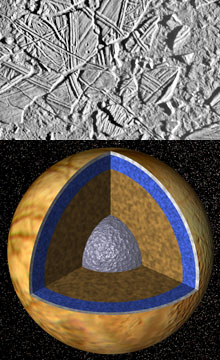 Jupiter has four large moons and a bunch of smaller ones. The four big moons are called the "Galilean moons". Three of them - Europa, Ganymede, and Callisto - are covered with water ice. That makes them a lot like Earth's frozen polar regions in some ways.

Each of these moons has some rocky material inside. However, they all have lots of ice in them too. The surface of each moon is also covered with ice. That doesn't mean that all of the water in these moons is frozen. Scientists think these moons, especially Europa, might have salty oceans under their icy surfaces. Some places near Earth's poles have water under ice. Sea ice near the North Pole floats on top of the Arctic Ocean. There are also lakes in Antarctica thousands of meters beneath the polar ice sheet.

Water is a key ingredient for life. If there are oceans under the ice of Jupiter's moons, could there be life in those oceans? Astrobiologists are especially interested in Europa. Europa is hot inside because it gets pulled and stretched by the gravity of Jupiter and the other moons. The same thing happens to Io. Io has lots of volcanoes because of this heat. Does Europa have volcanoes under its ice? Nobody knows for sure. If it does, it would be a lot like the hot water vents on the floor of the ocean on Earth. Those hot water vents have lots of living creatures around them. Could there be living creatures around hot vents under the ice on Europa?

These icy moons are like Earth's poles in one more way. If you could visit these moons, you might see the aurora - which we call the Northern Lights or Southern Lights on Earth. Scientists have spotted aurora on Ganymede. They think Europa and Callisto might also have beautiful auroral light shows too.