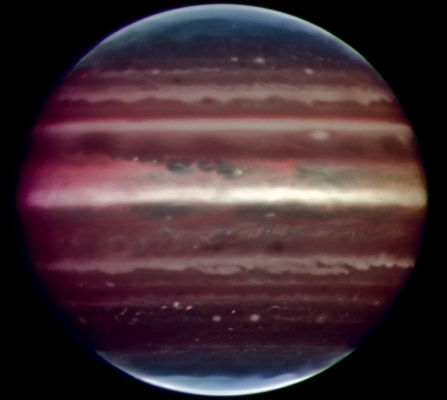 This picture shows Jupiter in August 2008. The picture was taken in infrared "light". Radiation particles around Jupiter crash into Jupiter's atmosphere near the North and South poles. This makes the lights of the aurora. (like the Northern Lights on Earth). The radiation causes changes in the gases in Jupiter's atmosphere near Jupiter's poles. It creates a haze in Jupiter's stratosphere. The polar haze looks blue in this picture. Can you see the blue haze over Jupiter's North and South Poles (top and bottom)?
Image courtesy of ESO/F. Marchis, M. Wong, E. Marchetti, P. Amico, S. Tordo.