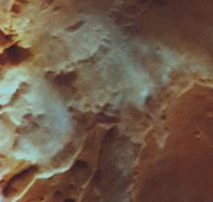 NASA marked another success as the Mars Global Surveyor slipped into its planned orbit on Thursday, September 11. Communication is flowing from the spacecraft to Earth, allowing scientists to check the condition of all of the onboard systems. So far, so good!

The arrival of the Surveyor probe followed the Mars Pathfinder by only two months. These two missions are America's first return to the Red Planet in over 20 years.

The Surveyor will map 99% of the Martian surface while in orbit about the planet. It will also study the atmosphere, the mineral distribution on the surface, and the magnetic properties of Mars.