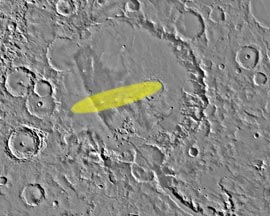 Gusev Crater, the landing site for one of the two Mars Exploration Rovers. The yellow oval shows where scientists expect the rover to land.
Click on image for full size
NASA/JPL

NASA will soon send two robotic rovers to Mars. The rovers are the main part of the Mars Exploration Rover (MER) missions. Rockets carrying the two rovers will be launched from Earth in May and June of 2003. The rovers will arrive on Mars in January 2004.

NASA just made the final decision about where on Mars each rover will land. NASA scientists are interested in places on Mars that might have had water. They think places that had water are the best places to search for signs of life. The two rovers will land at places where water may have been.

One rover will land in a large meteorite crater called Gusev Crater. It looks like Gusev Crater once had a large lake inside it. The other lander will touch down at a place called Meridiani Planum. Meridiani Planum seems to have a bunch of hematite in the area. Hematite is a mineral that often forms in wet places, especially hot springs. So both landing sites seem like places that once had water. Maybe the rovers will find signs of life there!

The Galileo spacecraft has finally reached the end of its road. Galileo has been orbiting Jupiter since 1995. On September 21, 2003, Galileo will dive into Jupiter's atmosphere and burn up. This crash...more

NASA will soon send two robotic rovers to Mars. The rovers are the main part of the Mars Exploration Rover (MER) missions. Rockets carrying the two rovers will be launched from Earth in May and June of...more