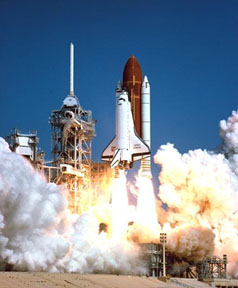 The next three NASA missions will be rescheduled due to inspections. Faulty wiring aboard Columbia has forced the program to investigate the other three spacecraft. The trouble began when Columbia's July 23, 1999, flight was put in danger when a short circuit caused two engine computers to fail. If the backups had also failed, the crew would have been forced to make an emergency landing.

Scientists later found that a small opening in wire insulation triggered the short circuit. When a second faulty wire was discovered, NASA had no choice but to delay future launches. Scientists found similar problems aboard Endeavor, Discovery and Atlantis.

"It is a direct result of the fact that we are doing the wiring inspections and repairs," said James Hartsfield, a spokesman for NASA's Johnson Space Center in Houston. "And from what we've found, the inspections have proven to be a very prudent thing for us to have undertaken on the orbiters."