With the help of the SOHO (Solar and Heliospheric Observatory) spacecraft, scientists at Standford University have made some exciting discoveries. The first discovery is that there are streams of plasma flowing beneath the surface of the Sun. "We have detected motion similar to the weather patterns in the Earth's atmosphere," said Dr. Jesper Schou of Stanford. "This flow is totally inside the Sun. It is completely unexpected, and cannot be seen at the surface."

These plasma streams are the smallest structures yet observed inside the Sun, but each stream is still large enough to engulf two Earths. It is thought that these streams may indeed affect solar "weather" or activity. These new findings will help scientists to understand increases in solar activity which directly affects the Earth causing occasional power and communications disruptions.

The second solar discovery is bands of gas similar to the Earth's trade winds. Standford scientists have found that there are gaseous bands located in both hemispheres that move faster than the material around them. These bands extend to a depth of at least 12,000 miles below the Sun's surface. These bands also have a relationship to sunspot formation as sunspots form at the edges of these zones.

For the last year, the SOHO spacecraft has acted as a solar observatory. It is 930,000 miles away from the Earth and has 12 scientific instruments. Scientists are excited about these recent discoveries and look forward to future observations as the Sun enters its next active cycle around the year 2001. 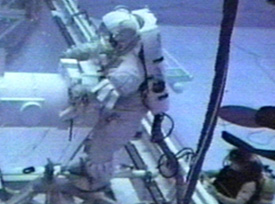 It was late in the evening when two astronauts approached the spinning 3,000 pound satellite. They delicately reached out to grab the lost satellite and bring it safely back to the U.S. space shuttle....more