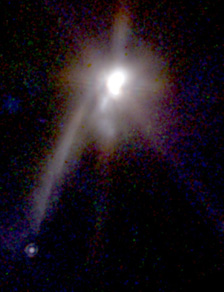 Possible planet? Protoplanet? Possibly. Scientists searching through Hubble images of stars in the constellation Taurus may have found what could be the first direct image of a planet outside our solar system. Up to this point, scientists have found a lot of evidence that other planets exist, but we haven't been able to simply take a photo of an extra-solar planet.

Susan Tereby of the Extrasolar Research Corporation in Pasadena, California made the discovery of this possible planet while studying a binary star system in Taurus. This possible planet has been given the name TMR-1C. The binary system and TMR-1C lie 450 light years from Earth. The mass of TMR-1C is estimated to be 2-3 times the mass of Jupiter.

"These future observations will be critical in verifying that this object is truly a planet and not a brown dwarf," said Dr. Ed Weiler, Director of the Origins Program at NASA Headquarters, Washington, DC. "We are sharing this preliminary data with the public at a very early stage in the research process because of its potential importance and because of the compelling nature of the image. If the planet interpretation stands up to the careful scrutiny of future observations, it could turn out to be the most important discovery by Hubble in its 8 year history."