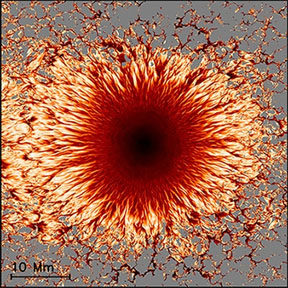 A detailed picture of a sunspot shows the striking details of its complex structure.
Click on image for full size
Courtesy of Matthias Rempel, NCAR

For the first time, scientists in Germany and the United States have developed a computer model that simulates an entire sunspot. Sunspots are significant ejections of plasma that cause the solar magnetic field to shift on the sun. The sunspots affect earth in many ways including interrupting communications and power, destroying satellites, and changing weather patterns.

The simulations have already allowed scientists to learn more about the sun than was possible before. Therefore, these computer simulations will allow us to predict and be prepared for sunspots and their effect on our planet. To create the models, scientists created a virtual domain eight times the earths diameter and as deep as the earths radius. This was not possible before because computers could not perform the calculations necessary. However, with new supercomputers made by IBM that perform 76 trillion calculations per second and better observation instruments, this computer simulation will allow us to learn more about the sun and sunspots.

Some scientific problems and processes are so complex that you need SUPERCOMPUTING power to tackle them! Just what is a supercomputer? A supercomputer is a computer that is among the largest, fastest or...more