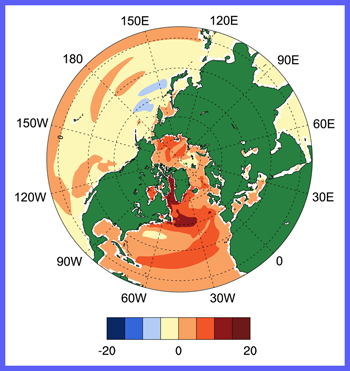 Water from Greenlands melting ice may cause sea level to rise more in the North Atlantic than anywhere else in the world.

Melting ice sheets cause sea level rise because the water is added to the ocean. But in this case, changes in ocean circulation are causing sea level to rise much faster.

Part of the reason ocean water moves around the ocean basins in this pattern is because the water is salty. Melting ice adds fresh water to the ocean, which could make the currents weaker.

Weaker currents could cause the dense layer of cold water that sits in the deep Atlantic to warm. Since warm water takes up more space than cold water, sea level would rise more than in other places if this water warmed.

To figure out how melting Greenland ice may affect sea level, scientists used a climate model. They tested three possibilities for the future.

First, they used to the model to test what would happen if the amount of ice that melts increases each year just as it has over the past few years. They found that this would cause sea level to rise up to 51 centimeters (20 inches) more than in other places.

Second, they tested what would happen if the amount of ice melt continued to increase, but not quite as fast. They found that this would cause sea level to rise about a foot

Third, the team tested what would happen with only a very small increase in the amount of melt each year. They found that, in that case, sea level wouldnt rise more than 20 centimeters (8 inches) more than in other places.

Sea level is creeping higher each year as the Earth warms.  As sea level continues to rise, there are many low coastal areas worldwide where homes, towns and cities are in danger of being flooded...more

There is a lot of ice on Greenland. But as our planet gets warmer, Greenlands ice is melting. Scientists have figured out that the ice is melting faster now. More ice melted during the summer of 2007...more