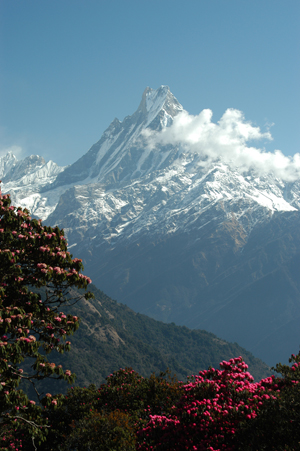 Throughout history, the changing fortunes of human societies in Asia have been linked to variations in the precipitation resulting from seasonal monsoons.

A new paper published online today in the journal Nature Geoscience suggests that variations in monsoon climate over longer time scales also influenced the evolution of the Himalaya mountain chain, the world's highest.

The climate over much of Asia is dominated by seasonal winds that carry moist air over the Pacific Ocean into East Asia and over the Indian Ocean into South Asia.

The East and South Asian monsoons are responsible for most of the rainfall in these regions. Although the time when these monsoon patterns were first established is unknown, many lines of evidence suggest that they first came about at least 24 million years ago.

The new study uses geochemical data from an Ocean Drilling Project sediment core extracted from the seafloor of the South China Sea to establish a record of the East Asian monsoon climate over that time interval.

"This synthesis of climate and tectonic studies, from Himalayan rocks to ocean floor sediments, has revealed the ancient history of a dynamic part of our planet," said James Dunlap, program director in the National Science Foundation (NSF)'s Division of Earth Sciences, which funded the research. "These results will guide us in our efforts to better understand the potential for change on Earth today."

Sediments in this core were eroded from the drainage area of the Pearl River system in China, according to Peter Clift, a geologist at the University of Aberdeen in Scotland and lead author of the paper. "Their chemistry records the relative intensity through time of chemical weathering in an area that received the bulk of its precipitation from East Asian monsoon storms."

Many researchers believe that a geologically "abrupt" uplift of the Tibetan Plateau--the largest high-altitude region on Earth, with an average elevation of more than 4,000 meters (13,000 feet)--8 to 10 million years ago caused a major intensification in the monsoon climate.

"South China Sea data do not support that interpretation," said Kip Hodges, a co-author of the paper and geologist at Arizona State University.

"After that, the intensity began to increase once more," said Hodges. "The implication is that either the development of the plateau was not as abrupt as we might have thought, or that an abrupt uplift of the plateau at 8 to 10 million years caused a change in precipitation patterns that was not recorded in East Asia."

Another controversy surrounds the degree of coupling between the South and East Asian monsoons. Could one have varied in intensity differently from the other?

The team compared the South China Sea record with less complete sedimentary records from the Arabian Sea and Bay of Bengal--which contain sediments that were eroded from the Himalaya, where the principal rainfall comes from South Asian monsoon storms--to argue for a linkage between the two monsoon systems over most of the past 23 million years.

The most interesting correlation was found when the team compared the sedimentary records to cooling age patterns in the Himalaya.

"It implies, once again, that Earth is a complex system," said Hodges. "We cannot begin to fully understand mountain building without appreciating the roles of the hydrosphere and atmosphere in the evolution of mountain ranges."

But Hodges cautions that the results of this study are suggestive. "It is important to confirm our interpretations by generating a more comprehensive cooling age dataset from regions of the Himalaya that have not yet been studied because of logistical constraints or political instability."

Adds Clift, "We need more complete offshore sedimentary records from the Arabian Sea and Bengal Fan to make a solid case for linkages between the South and East Asian monsoon systems."