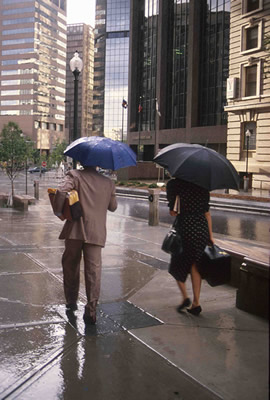 A new study found that nine out of 10 adult Americans look at the weather forecast more than three times a day. The study looked at what people think about weather forecasts and how important they think they are.

Jeffrey Lazo, NCAR scientist and the lead author on this study, explains that understanding how people use day-to-day weather information can help scientists develop more relevant and valuable weather forecasts and warnings by providers like the National Weather Service. Gaining a better understanding of people's attitudes and behaviors toward forecasts also provides valuable information to emergency managers.

Although the number of forecasts an individual obtains varies significantly from day-to-day, depending on factors like weather events and planned daily activities, the researchers found that on average individuals received forecasts 3.8 times a day. These findings show that Americans receive a yearly total of about 300 billion forecasts.

NCAR associate scientist and coauthor Julie Demuth said the study also revealed people's curiosity about weather, with 85 percent of respondents saying that more than half the time they obtain forecasts simply to know what the weather will be like. "This tells us that people generally have a high level of interest in weather forecasts, regardless of whether they use this information directly for planning and decision-making," says Demuth.

Many people use forecasts for planning specific activities, such as vacations, and routine daily activities, such as deciding what to wear and how to get to work or school. The peak periods for accessing forecasts were the early morning, early evening, and late evening hours, says Demuth.