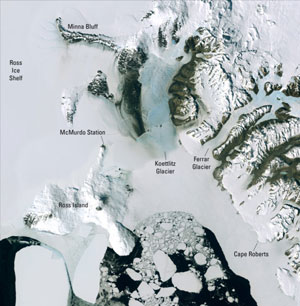 This image of the area around McMurdo Station shows much detail of the ice shelves, mountains, glaciers of Antarctica. It is a fascinating and important place to study.
Click on image for full size
Courtesy of USGS

Scientists have made a new map of Antarctica that is going to be a very helpful tool for studying that region. It is called a mosaic map because the map puts thousands of scenes into one map that is has a lot of detailed information.

The map is called LIMA, which is short for the Landsat Image Mosaic of Antarctica. Landsat launches satellites that take digital photographs of the Earth that scientists use to study the Earth's environment.

The LIMA map will be very helpful to scientists and the general public, especially because people today are worried about the polar ice caps and the warming temperatures in the Arctic and Antarctic regions. LIMA will be used to answer scientific questions, and teachers and students will use LIMA to learn more about Antarctica.

Robert Bindschadler, a scientist at NASA, said that LIMA is the most detailed map of Antarctica and offers the most accurate, true-color views of Antarctica that are possible. He compared the LIMA map with the other maps scientists have been using by saying that LIMA is like watching high-definition TV in living color and the other maps are like watching the picture on a small black-and-white television.