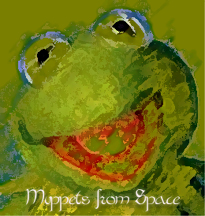 The muppets are back! Those wacky film stars have returned for yet another movie, entitled "Muppets From Space". The film concentrates on finding Gonzo's real home. When his food speaks to him, Gonzo realizes that he is from outer space! From there, the movie follows Gonzo and his friends on an exciting adventure full of danger and comedy.

While Gonzo tries to reach his family and convince his friends he isn't crazy, an evil government agent plots to kidnap the muppet to save his job. It's up to Gonzo's old friends to save the day! All your favorite muppet characters are featured, including Kermit the Frog, Miss Piggy and Animal.

Unfortunately, there are only a few scenes which portray views of space. When Gonzo flies into the sky, there are some images of stars, planets and even a nebula. However, a majority of the action is held on Earth. The good news is, there are plenty of laughs in the movie, enough to make it a film worth seeing.

The soundtrack is really good, with songs like "Celebrate" that get you dancing in your seat. And just like other muppet movies, "Muppets From Space" uses scenes from "MIB" and others for tasteful humor. A great blend of guest stars, like Rob Schneider and Kathy Griffin only adds to the film quality.

So, whether you're old enough to remember the original muppets, or a newcomer to the series, you should take the time to see this wonderful movie!