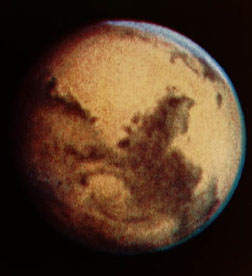 Scientists from the University of Arkansas found an Earth bacteria that can live in an environment similar to Mars. The microbe is usually found deep within the earth or in a cow's stomach. They survive in places without oxygen.

The bacteria was grown in culture dishes with an environment mimicking Mars. There was no oxygen present, but there were plenty of carbon dioxide and hydrogen gases. The soil was close to dirt on Mars, with no nutrients and only traces of water. The result was a thriving colony of methane-producing bacteria.

Because this special type of bacteria naturally produces methane, it may be used to start a new colony on Mars. Scientists can send the bacteria to the red planet, almost playing creator by starting the process and watching it grow. It could also be used to produce an environment close to Earth's. Methane is a greenhouse gas, which means it can warm the surface.

"If man were to go to Mars someday and introduce life, this might be the form of life that would grow there," Timothy A. Kral of the University of Arkansas said. "If you were going to try to create Earthlike conditions there, putting this type of organism on Mars might be the thing to start it."

The methane could even be used as a fuel for humans that may one day visit Mars. The gas serves as a rocket propellant and as fuel for heat. Astronauts could use the methane to propel themselves back to Earth.

"It made methane just like it does on Earth," Kral said. "It grows just fine in the Martian conditions."