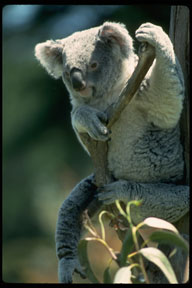 By adding this cuddly animal to the list, people will no longer be able to import or export koalas. Scientists also think everyone will now be more aware of the dangers of urbanization and logging. Koalas live on eucalyptus trees, and a large percentage of these special plants are being destroyed.

"Americans are captivated by koalas. However, because our familiarity comes from television, magazines and zoos, most of us have never seen wild koalas and would be surprised to learn that, just like many of our own species, their future is in jeopardy because of habitat destruction," said Jamie Rappaport Clark, director of the Fish and Wildlife Service, the principal federal agency responsible for conservation.

The United States and Australia are currently working together to save the koalas from extinction.