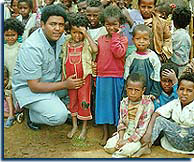 An African woman spends hours scourging the land for enough fuel wood to be able to cook that evening for dinner. An African family living in the city spends more than half of their entire income on fuel for cooking. This is the unfortunate, but true situation that plagues many Africans at the present time.

The collection of firewood in Africa consumes much time, human energy, and money. But it has other implications as well. The scourging of the land for fuel wood strips the land of vegetation. This lack of vegetation is a catalyst for desertification. In turn, desertification destroys what might have been arable land.

There is a great need for alternate energy sources in Africa. Solar energy is a viable option. In fact, volunteers from Solar Cookers International (SCI) are promoting solar cooking technology in Africa.

SCI now manages solar cooking training in eight refugee camps and underdeveloped areas in Africa. SCI's Campbell said, "Solar cooking provides tremendous health, environmental and financial benefits to those who can use it. Better identification of target areas will help spread this powerful tool farther and faster than before."

This identification of target areas is being aided by NASA's Mission to Planet Earth satellite program. It provides reliable solar data for any location on Earth. The data is referred to as Surface Solar Energy (SSE) and has become invaluable to SCI in choosing where solar cooking will be most useful to the local population.

Solar cooking is expected to bring great improvements to the standard of living in Africa and other developing countries. It is a relatively inexpensive heat source, and it reduces smoke, air pollution, and deforestation.