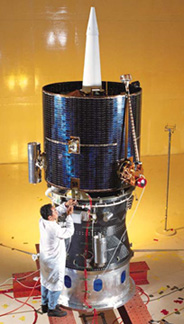 It will take the Prospector four and a half days to reach the Moon. This mission is NASA's first mission to the Moon since Apollo 17, so this really is another giant leap for mankind! Apollo 17 was the last mission where men walked on the Moon - 25 years ago.

The Prospector spacecraft carries with it one ounce of Gene Shoemaker's ashes. They were placed in a cylindrical container, wrapped with an inscription honoring Shoemaker's life. Shoemaker, who died on July 18, 1997, discovered (with the help of his wife Carolyn and colleague David Levy) the Shoemaker-Levy comet.

The Lunar Prospector has reached the Moon. The Prospector is in the correct orbit now so it can start mapping the Moon's surface. The current spacecraft status is healthy, with all instruments on. Communication...more