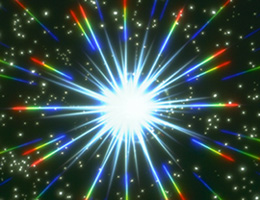 This brilliant image shows a gamma-ray burst. The image was created with information recorded by the Near-Earth Asteroid Rendezvous mission. Discovered thirty years ago, gamma-ray bursts remain somewhat of a mystery to scientists. The burst shown here released as much energy in ten seconds as the Sun will release in 10 billion years.
Click on image for full size
Corel Photography

No one knows their cause or how far away they are, but the NEAR (Near-Earth Asteroid Rendevous) spacecraft took significant steps toward revealing the mysteries behind gamma-ray bursts.

It was unexpected really. The NEAR spacecraft was en route to its next asteroid destination when Earth-bound scientists decided to activate the gamma-ray spectrometer. It was originally supposed to be activated in 1999. This premature activation led to the first detection of a gamma-ray burst on September 15. Six more bursts have been detected since that time.

The NEAR spacecraft isn't alone in its observations. These bursts have been confirmed by the Ulysses spacecraft which is in polar orbit about the Sun and the Wind spacecraft orbiting near Earth. "Seeing this burst validates that the NEAR detector can be a true working partner in the interplanetary network for gamma-ray burst detection," says gamma-ray instrument engineer John Goldsten, the first person to see the gamma-ray burst data.

Gamma-ray bursts are one of the true mysteries in astrophysics. They were discovered over 30 years ago. Their origin in space is not known and they tend to be randomly distributed throughout space so they are hard to predict or track. These mysteries are likely to come to an end when we can locate the source of the bursts and identify these areas in detail with optical and radio telescopes. The addition of the NEAR spacecraft to an interplanetary configuration of gamma-ray detectors will certainly be an aid in locating the source points of the bursts.