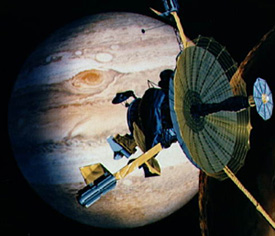 Galileo concluded the first part of its mission on December 7, 1997. It spent the last two years studying Jupiter and its moons.

Galileo just started part II of its mission. This phase of the mission will last another two years. During these two years Galileo is scheduled to fly by Europa eight times, Callisto four times and Io two times. A flyby is exactly what it sounds like. The spacecraft passes near to the planet or moon so that it is close enough to take pictures and make measurements (of things like magnetic fields).

The Galileo spacecraft completed its first flyby of Europa on December 8th. It passed within 124 miles (200 kilometers) of the moon. Europa is a very intriguing moon. Scientists think it might have liquid oceans under its surface (probably not liquid water like our oceans here on Earth!).

The Galileo spacecraft was launched in October 1989. So, Galileo has been in space more than 10 years and it has been orbiting Jupiter for more than five years. Galileo is still going strong! "We're proud...more