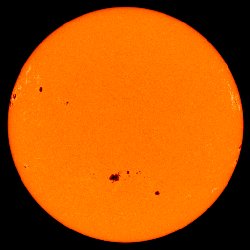 An image of the Sun showing sunspots (black splotches). The image was taken by the SOHO satellite on August 28, 2001. The largest sunspot seen is sunspot 9591 (towards bottom-center of image). There is a good chance that this sunspot will produce a solar flare in the next day or two!
Click on image for full size
Courtesy of SOHO/MDI

Windows to the Universe Spaceweather site

A friend of mine was flipping through radio stations yesterday on the way to work. Surprised at how few stations would come in, he checked that the antennae was still in place when he got out of the car. It was there, but his radio reception was not! On the way back from work, the same thing happened - only a tenth of the normal radio stations would come in. He wondered if something funny was happening with the atmosphere or if there was some unusual magnetic activity going on...in fact, there was and there is!

The most powerful solar x-ray flare since April erupted on Saturday, around noon EST. This flare caused radio blackouts and communication disturbances. Some blackouts lasted more than an hour in the northern hemisphere. Scientists were predicting that there might be a good show of auroral lights on Monday evening. Unfortunately, conditions were not right for aurora to be seen...but there is excitement brewing over the potential for another solar flare!

The picture to the left shows the Sun and its sunspots. Sunspot 9591, the largest sunspot currently, has potential to explode! NOAA predicts that there is a 75% chance that a class M flare will be released from sunspot 9591 in the next 24 hours and a 25% chance that a class X flare would be released in the next 24 hours. If sunspot 9591 did explode in a solar flare, it could cause a geomagnetic storm at Earth which could cause auroral lights, increased atmospheric drag, and of course radio communication disturbances that my friend and you have possibly noted! Stay tuned to Spaceweather.com for the latest information on sunspot 9591.