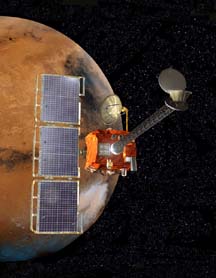 The Planetary Society is going to help send a special science project to Mars. What's so special about it? It's going to be designed by someone under 18 years old! The experiment will fly aboard the Mars Surveyor 2001 spacecraft. Any student under 18 who isn't in college can take part. The experiment needs to be very small and very light so it won't be easy to design!