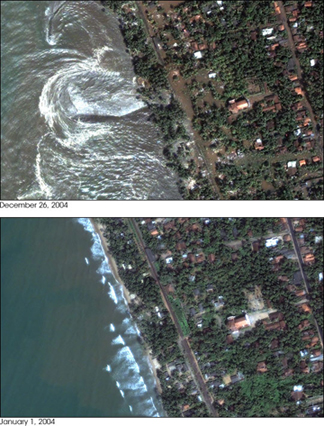 On the morning of December 26th, 2004, an enormous earthquake occurred below the Indian Ocean, 150 km west of the Indonesian island of Sumatra. The earthquake, caused by moving tectonic plates, was the most powerful to occur on our planet in the past 40 years, a magnitude of 9.0 on the Richter Scale. During the earthquake, part of the sea floor rose about 10 meters. This caused instability in the seawater above and generated huge tsunami waves that spread across the Indian Ocean.

The enormous waves moved quickly across the ocean before hitting coastal areas causing massive destruction to towns and resorts along the coast. Over 150,000 people were killed as the tsunami waves hit the coasts of Indonesia, Malaysia, Myanmar, Thailand, Bangladesh, Sri Lanka, India, and the east coast of Africa. There was very little time to sound alarms and get people away from the coast.

There will be a total lunar eclipse on Wednesday night, October 27, 2004. The Earth's shadow will darken the Moon for more than three and a half hours, while the "total eclipse phase" will span a period...more