Scientists have recently discovered that thousands of Adelie Penguins thrive in patches of the chilly Southern Ocean near Antarctica's coastline. In these special areas of the ocean, called polynyas, penguins don't need to travel far to find food.

Much of the shallow ocean near Antarctica is covered with ice, but polynyas are not. That's what makes them special. Polynyas can be very big areas, as big as the state of California, and are usually formed when strong winds blow ice away from the coast, or when ice is blocked by something like an ice shelf, exposing the ocean water.

A tiny, shrimp-like animal called krill eats the phytoplankton. Since there is so much phytoplankton in a polynya, the little krill munch away and reproduce rapidly, becoming very abundant. Krill is the main food for Adelie Penguins as well as other animals such as seals and whales. So, when the krill is abundant, so are the penguins!

Researchers say that they didn't know how much the penguins depended on polynyas before their study. They warn that if the polynyas change, the entire living community would too.

How could thousands of penguins have been hidden from scientists in these ocean oases for so long? The polynyas are impossible to see by ship, even though many of them are quite large, because they are surrounded by ice. Two satellites, NASA's Sea-Viewing Wide Field-of-View Sensor (SeaWiFS) and NOAA's Advanced Very High Resolution Radiometer (AVHRR), provided a way for researchers to get very high quality data about 37 different polynyas over five years.

The satellites provided weekly measurements of the amount of chlorophyll in the polynyas. Chlorophyll is the pigment in plants that makes them green. It allows plants to harness the Sun's energy through photosynthesis to make their own food. If the satellites recorded more chlorophyll in the polynyas, then that meant the phytoplankton were thriving as were the other members of the food chain, the krill and penguins. 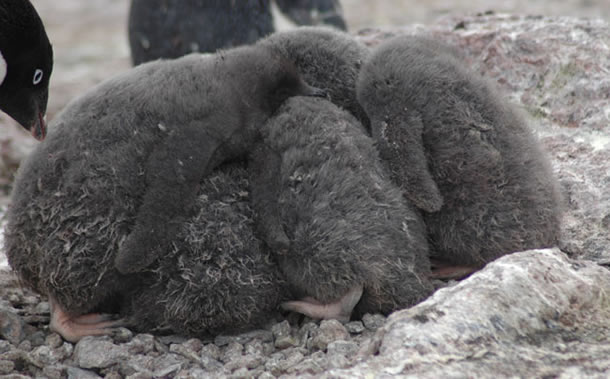 The Crèche is On

These chicks are just over 3 weeks old and have formed a crèche. They will huddle together against the cold and the Skuas while both parents are out feeding. Today is particularly cold and windy, so you...more

Using Leaves From the Past to Tell the Future!

Today, our climate is changing at breakneck speeds. To better understand how this speedy climate change may affect plants and animals in the future, researchers are looking into the past. The researchers...more

Fireball explodes in sky near Chicago

A large meteor exploded in the sky near Chicago shortly after midnight on the morning of March 28, 2003. People in Wisconsin, Illinois, Indiana, and Ohio witnessed the disintegration of the meteor in Earth's...more

The first eclipse of 2003 will occur on the night of Thursday, May 15th (or early in the morning on May 16th if you live in Europe!). This eclipse is a total lunar eclipse, so the Earth's shadow will darken...more