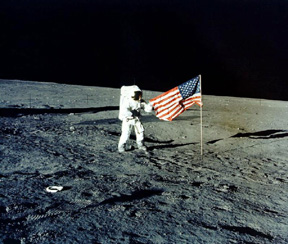 Another member of the elite twelve that landed on the Moon has passed away. Charles 'Pete' Conrad Jr. died on July 8, 1999, at a hospital in California due to injuries sustained in a motorcycle accident. Conrad was 69 years old.

Conrad was undoubtedly most famous for his quote used when first landing on the Moon during Apollo 12. During Apollo 11, Neil Armstrong proclaimed, "that's one small step for man, one giant leap for mankind." While taking his first steps, Conrad exclaimed, "Whoopie! Man, that may have been a small one for Neil, but that's a long one for me."

During the Apollo 12 mission which he commanded, Conrad spent several hours on the Moon's surface. He and fellow astronaut Alan Bean collected lunar rocks and also obtained valuable information from Surveyor 3, which had been on the lunar surface for 2 years. It was on that day, Nov.19, 1969, that Conrad became the third person to ever step onto the Moon. Other highlights of his life include the lightning strike that almost ended the Apollo 12 mission and his trip to Skylab. Conrad and his crew were the first to ever make contact with the station in space.

"Like all these guys he took a great satisfaction from overcoming adversity and demonstrating his skill. The main thing about Pete Conrad was there didn't seem to be anything he wasn't good at as an astronaut," said Andrew Chaikin, whose book, A Man on the Moon, tells the story of America's push into space.

Pete Conrad was born in Philadelphia, Pennsylvania, in 1930. He earned a degree in aeronautical engineering from Princeton University in 1953 and entered the Navy. He was chosen as an astronaut while serving as a test pilot at the Navy Test Pilot School at Patuxent River, Maryland. From there, Conrad joined the Gemini program, aimed at pushing the United States ahead of the Soviet Union in the race to the Moon. His last shuttle mission was to repair damages sustained by Skylab during its launch into space. Conrad claims this to be his most difficult mission, but also his greatest success.

"His whole life was devoted to pioneering," said another former astronaut, Ed Mitchell. "He was a pioneer in the aviation world, a pioneer and an explorer in the space world. That's how he'd want to be remembered, I'm sure."

Conrad is survived by his wife, Nancy, three sons, and seven grandchildren.