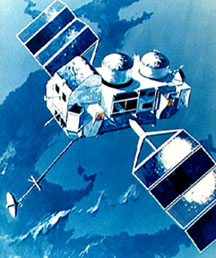 The Compton Gamma Ray Observatory was destroyed after nine years of service. NASA watched as the large instrument slowly burned through Earth's atmosphere. Scientists guided the observatory down as chunks flew into the Pacific Ocean.

This was the first time a satellite was put to rest by this method. Scientists say there was no problem bringing Compton in safely so that it would land in the Pacific Ocean and not on land.

During its nine-year career, the Gamma Ray Observatory searched the Universe for those mysterious gamma rays. We still have no idea what causes gamma rays, but we do know they are emitted by stars and black holes. Over 2,000 papers have been written thanks to the Compton Observatory. It will surely be missed.