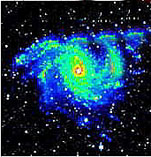 For more information on supernovae

Astronomers spotted an extremely bright object at the Kitt Peak National Observatory in Arizona. It was seen again in the x-ray portion of the spectrum with the ROSAT X-ray satellite. It was bright like a young supernova, but possessed the speed and the elemental make-up of an older supernova. Astronomers remained confused about the identity of the object until they turned to the Hubble Space Telescope.

Using the Hubble's Wide Field and Planetary Camera 2, astronomers were able to identify two separate objects very close to each other. Hubble imaging showed two supernovae crashing into each other.

When a massive star explodes, gas and debris are thrown off at speeds up to 22 million miles per hour, producing a shock wave that compresses the gas into a dense shell of material. It was the two shells of the supernovae crashing into each other that was producing such a dramatic light display for astronomers.

William P. Blair, a John Hopkins University astrophysicist, is leading the team of scientists who are studying the supernovae in galaxy NGC 6946. This spiral galaxy is located 17 million light years away and can be viewed in the northern constellation Cepheus.

One can feel Blair's excitement for this unique viewing opportunity as he stated, "It's the first time that we've identified one of these interactions right when the shells are in the process of slamming into each other. The reason this object is so bright is that we caught it at a very specific time in its evolution. And Hubble's resolution is what allowed us to see it."