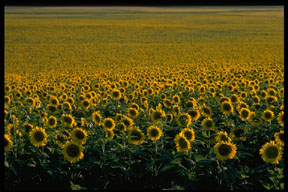 "Some of these sites look like asphalt parking lots," says Greg Thoma, a chemical engineer at the University of Arkansas.

Sadly, humans have a habit of making messes in our environment. Oil spills, toxic chemicals and other harmful materials ruin otherwise healthy land. Normally it takes a lot of time and money for cleanup, but scientists say reinforcements are on the way.

Biologists from various universities have discovered that some species of plants will clean up these wastes. Gardeners everywhere hate crabgrass more than any other plant, but it happens to be a great fighter when it comes to hydrocarbon contamination. The "weed" attracts microorganisms which eat the contaminants. Other plants, such as poplar trees, actually absorb the materials into their roots, limbs and leaves.

It may take years before a contaminated area is cleaned up, but the cost is virtually nothing compared to the typical clean up process. Transporting the chemicals out of the area takes complex machinery and manpower, and doesn't really solve the problem because the chemicals are dumped somewhere else. The plants, however, can be removed and burned once the chemicals are absorbed.

Scientists say much more research is needed before this procedure is used regularly. They need to make sure the organisms that eat the chemicals don't end up spreading the chemicals around instead of eliminating them. But if this process, which is called phytoremediation, works, we will have a great weapon against land contamination.