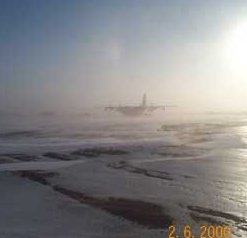 Since the 1980's, scientists have been following ozone depletion over the south pole very closely. After all, it is over Antarctica that we find the infamous Ozone Hole. Data gathered last spring shows that ozone depletion is becoming more and more prominent in the higher latitudes of the northern hemisphere as well.

The Antarctic Ozone Hole refers to a lack of ozone in the stratosphere. This is a problem for life here on Earth. Lower ozone concentrations in the stratosphere means higher UV levels at the surface. Increased UV rays can be harmful to people and other life such as plants!

The ozone depletion found in the northern hemisphere has been at lower levels in the atmosphere. A C-130 aircraft observed the tropospheric ozone loss while flying at extremely low altitudes over Hudson Bay, Baffin Bay, and parts of the Arctic Ocean. Usually, we think of stratospheric ozone as a beneficial protectant and tropospheric ozone as a pollutant. So, less ozone near the surface might sound like a good thing. But, scientists are still concerned.

"If there were no ozone anywhere at the surface, it would be terrible," says National Center for Atmospheric Research (NCAR) scientist Brian Ridley. High concentrations of ozone near the surface of the Earth can be a pollutant, but it is also an important source of the OH radical. The OH radical is the great cleanser of the atmosphere in that it removes many pollutants from the atmosphere very quickly. "Globally these short, shallow episodes at the Arctic are not threatening," he says, "except that they show us how much we still don't know about atmospheric chemistry."

This study was part of the TOPSE experiment (Tropospheric Ozone Production about the Spring Equinox) led by NCAR which is managed by UCAR (University Corporation for Atmospheric Research) with participation from NASA and funding from the NSF (National Science Foundation).