This is a sketch of the robotic arm now in place on the International Space Station. The arm was built by Canada and is also called the Mobile Servicing System or MSS. The Special Purpose Dextrous Manipulator (also called the Canada Hand!) is really a 2-armed robot that will be used in the future for assembly tasks on the ISS. This will cut down on the number of spacewalks astronauts will have to do in the future. 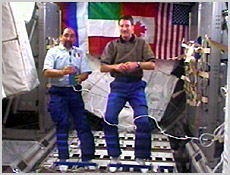 On the left here is Umberto Guidoni who is a mission specialist onboard STS-100. On the right is Commander Kent Rominger. They are having a "teleconference" with Italian President Carlo Ciampi, European Commission President Romano Prodi and European Space Agency Director-General Antonio Rodota from inside the Raffaello Multi-Purpose Logistics Module. This is the STS-100 patch. The patch itself is shaped like an EVA helmet (extravehicular activity) because of the spacewalks performed during the mission. Inside the space helmet, you see the shuttle, the ISS, and a star for the children of the STS-100 crew. On the bottom of the patch, you'll see representations of the American, Russian, Canadian and Italian flags. The diverse crew onboard STS-100 are from these nations. This is the Italian-built Raffaello module. Raffaello will be joined by 2 other modules called Leonardo and Donatello. This team of 3 modules will serve as moving vans for the ISS.