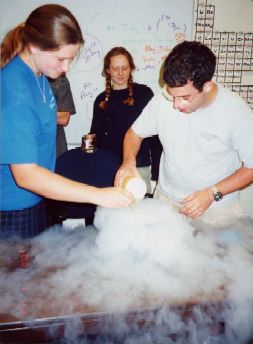 As shown in this picture, the element Nitrogen, when kept very cold, is a liquid. In this picture the liquid can be seen evaporating (changing phase from a liquid to a gas).

If conditions are just right, the element Hydrogen, which is normally a gas, becomes a liquid, just as Nitrogen does if the temperature is just right.

The first liquid layer inside Jupiter, right under the atmosphere, is the liquid hydrogen layer. The hydrogen atmosphere becomes thicker and thicker, like a dense fog, with more and more liquid droplets,...more

The first liquid layer inside Saturn, right under the atmosphere, is the liquid hydrogen layer. The hydrogen atmosphere becomes thicker and thicker, like a dense fog, with more and more liquid droplets,...more

The aurora we are most familiar with is the polar aurora. This is what people are talking about when they say the northern or southern lights. But there are other less-known aurora, such as SAR arcs....more

The Effect of Aurora on the Atmosphere