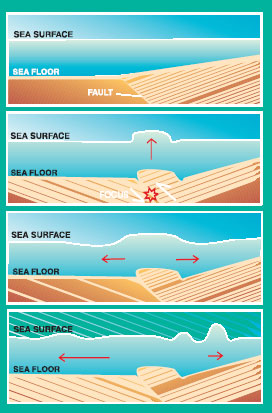 A tsunami is several large waves made in an ocean or other body of water by a disturbance. The disturbance could be from an earthquake, landslide, volcano, or meteorite. The picture at the left shows how an earthquake can make a tsunami in the water that lies above.

Earthquakes under the sea
Earthquakes happen when Earth's tectonic plates move against each other. If an earthquake happens on the ocean floor, the water above can move as well. Tsunami waves are made as the water tries to find a stable position again.

Undersea landslides
Large earthquakes can cause these landslides. The landslide can also cause tsunami waves since the moving debris will cause water the move.

Undersea volcanoes
Did you know there were volcanoes under the sea? Sometimes a strong eruption from one of them can uplift the water above and generate a tsunami.

Asteroid impacts
Falling asteroids disturb the water from above, much like a stone falling into a pond (but much larger!).