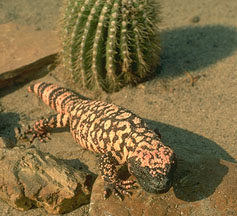 Reptiles are some of the most interesting creatures of the desert. Reptiles can withstand the extreme temperatures because they can control their body temperatures very easily. You can put most of the desert reptiles into one of two categories: snakes and lizards.

Many species of rattlesnakes can be found in the desert. Rattlesnakes have a noisy rattle they use to warn enemies to stay away. If the predator isn't careful, the rattlesnake will strike, injecting venom with its sharp fangs. Other desert snakes include the cobra, kingsnake and the hognose.

Lizards make up the second category of desert reptiles. They are probably the most bizarre looking animals in the desert. While some change colors and have sharp scales for defense, others change their appearance to look more threatening.

One such creature is the frilled lizard. When enemies are near, the lizard opens its mouth, unveiling a wide frill. This makes the lizard look bigger and scarier. The shingleback has a tail with the same shape as its head. When a predator bites at the tail, the shingleback turns around and bites back!

There are only two venomous lizards in the world, and one of them is the gila monster. It has a very painful bite! If you see one, it's best to get away!