Warming in the Polar Regions

Some of the most dramatic impacts of the warming in Antarctica have been the break up of ice shelves.  6760 square miles (17,500 square kilometers) of ice have collapsed into the Southern Ocean since 1974. The animation at the left shows the time-lapse breakup of the Larsen B ice shelf.  Ice shelves are melting and collapsing into the ocean where summer temperatures have become warmer.  When an ice shelf collapses into the ocean, there is less to support the glacier it was connected to on shore.  Scientists are finding that Antarctic glaciers are moving more quickly towards the ocean once an ice shelf is gone.

The waters of the surrounding Southern Ocean are also getting warmer. While ocean temperature does not change as rapidly as air temperature, between the 1950s and 1980s the Southern Ocean warmed 0.3°F (0.17°C). Warmer ocean water speeds the melting of ice shelves and it is having an impact on the sensitive marine ecosystem of the Southern Ocean. Antarctic krill, an important species near the base of the Southern Ocean food chain, may be declining in numbers because of warming and decreasing sea ice. The decline in winter sea ice has also affected penguins in the region. Adelie penguin populations have shrunk by 33% in the past 25 years. Areas of the Antarctic Peninsula that were once lively Adelie penguin colonies are now abandoned, and the remains of their simple rock nests litter the landscape. (To take a look at an abandoned colony, click here.) These penguins have moved south to areas that are colder.

Unlike the rapidly warming Antarctic Peninsula, temperatures in the interior of the Antarctic continent do not appear to be rising yet.  However, global climate models indicate that Antarctica will become warmer in future decades. Scientists have long established that the Antarctic Peninsula is one of the most rapidly warming spots on Earth. Now, new research using detailed satellite data indicates that the changing climate is affecting...more 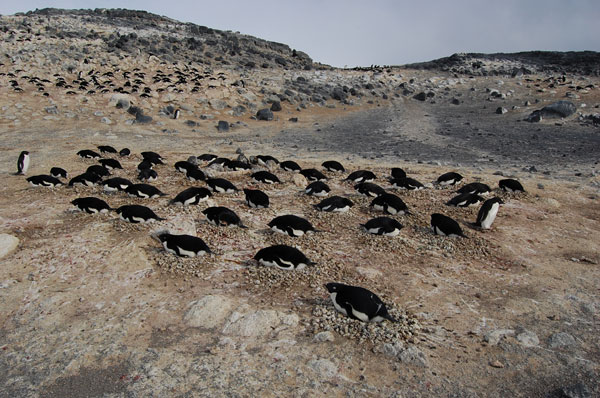 It's Quiet Time in the Nursery

Most of the eggs at Cape Royds are laid before the end of November. The breeding season is very short because the Antarctic summer is very short. If Adelie parents do not get their chicks raised and fledged...more