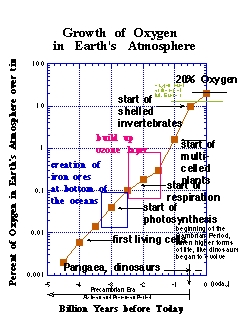 In the early Earth there was very little oxygen. At the top of Mt. Everest it is very hard to breathe because there is not enough oxygen. So imagine how hard it would be to breathe in the environment of the early Earth!

The formation of life on Earth played a very large role in the build up of oxygen in the environment. At first, bacteria began to produce oxygen as a waste product of their activity. That oxygen reacted with iron in the ocean to make iron ore. Later, after the iron in the ocean was gone, and the making of iron ore was finished, enough oxygen accumulated for

Once there was enough oxygen to breathe, and an ozone layer developed, lots of different kinds of life forms, including dinosaurs, came to be. The Earth had entered what is known as the Cambrian age.

Why did the dinosaurs go extinct? No one knows for sure, but there are some explanations that seem to make sense. At the time the dinosaurs and lots of other species died out (which is sometimes called...more