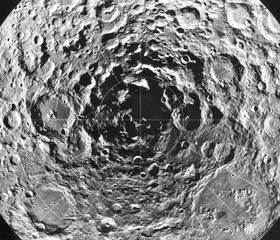 This picture shows the Moon's South Pole. Some areas near the pole are in dark shadows all of the time. There might be water ice in some of those shady places.
Click on image for full size
Image courtesy NASA.

The North and South Pole of the Moon are interesting places. Some areas near the Moon's poles are almost always in sunlight. Other places near the poles are always in dark shadows.

Earth is tilted on its axis by 23°. This tilt causes our seasons. During summer it is always light near the pole, but in the winter it is dark all the time. The Moon is hardly tilted at all (less than 2°), so it doesn't have seasons. Places near the Moon's poles are always on the edge between day and night.

There are also some really dark, cold places near the Moon's poles. The bottoms of some deep craters may be in dark shadows all of the time. That would make them very cold, since they wouldn't be heated by sunlight. There might even be water ice in some of those dark craters. Ice could tell us a lot about the Moon's history. It could also be used by astronauts as drinking water, to make oxygen to breath, and to create rocket fuel.

In decades past is was accepted that the Moon contained no water. Moon rocks collected by Apollo astronauts (at lunar equatorial regions) contained no traces of water. Lunar mapping performed by the Galileo...more